TIPA and PerfoTec’s combined technologies have been found to extend the shelf-life of fruit, vegetables and flowers by up to 2x. 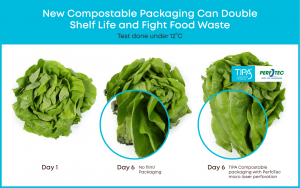 TIPA’s compostable packaging performs like a conventional plastic but decomposes in compost back into the soil with no toxic residue, microplastics or other pollutants. Its packaging solutions seamlessly fit with industry machinery and manufacturing practices.

These technologies provide an innovative end-of-life solution for produce packaging while supplying retailers and end-consumers with extended produce shelf-life.

The partnership comes in response to high consumer demand to reduce food waste and combat plastic pollution. Some 85 percent of UK consumers believe compostable packaging should be used to wrap food as an alternative to plastic.

Industry demand for environmental plastic substitutes that don’t compromise produce quality is also rising. Growing market share for eco-friendly alternatives to conventional plastic, like compostable films, is projected to be a key contributor to the growth of the global flexible packaging market. The market is expected to increase from 160.8Bn USD to 200.5Bn USD by 2025.

PerfoTec’s CEO, Bas Groeneweg said: “After months of trials with this film, we realised that TIPA’s compostable film combined with PerfoTec’s patented laser perforation provided the best shelf-life for fruits, vegetables and flowers by far. It provides longer shelf-life and freshness which means fewer quality losses, less food waste and cost savings for producers and retailers.

“Partnering with TIPA to create compostable packaging that can outperform conventional plastic is a hugely exciting step forward for sustainable packaging. We’re delighted to be playing our part in the stride against quality losses, food waste and plastic pollution.”

Ayellet Zinger, VP of Sales for TIPA said “In combining our technologies, TIPA and PerfoTec form a synergistic partnership that optimises flexible packaging for produce.

“We have created an exceptional product that extends the shelf-life of fruit, vegetables and flowers with a protective and fully compostable film that decomposes just like the product its packaging. TIPA and PerfoTec bring huge added value for flexible produce packaging, reducing food and packaging waste, and providing solutions for the future of sustainable packaging.

Too much plastic waste ends up in landfill and in our region’s natural environments. In Australia, only 18% of all plastic packaging is recovered for future use, while n New Zealand, 41% of recyclable plastic containers are sent to landfill. A similar situation is happening in the Pacific Islands, where over 300,000 tonnes of waste plastic is generated each year.

However, a new way for addressing the plastics issue is here. On 1 January 2021, the Australian, New Zealand and Pacific Island Plastics Pact (ANZPAC) launched in our region – a collaborative platform for the circular economy, in which plastic never becomes waste or pollution.

ANZPAC is part of the Ellen MacArthur Foundation’s global Plastics Pact network, a globally aligned response to plastic waste and pollution that enables vital knowledge sharing and co-ordinated action. Each Plastics Pact brings together businesses, policymakers, and NGOs around the world, who through shared ambition, combined expertise and collaboration create regional and national solutions to plastic waste and pollution.

Here at ABA we are proud to be one of the earliest adopters of ANZPAC. As a Member, we will be working closely with other businesses, governments and NGOs to move towards a circular economy for plastic

The ANZPAC Plastics Pact will:

• Coordinate and align stakeholders from industry, government, academia, NGOs and industry associations to work towards the Ellen MacArthur Foundation’s vision for a circular economy for plastic
• Work collaboratively towards national and regional Plastics Pact 2025 Targets
• Build a clearly defined roadmap for how the region will reach them
• Measure and communicate progress through public annual reporting
• Co-design and implement pioneer initiatives, activities and solutions across the region
• Share knowledge and experiences, and learn from regional, national and global experts

To find out more about ANZPAC, visit www.anzpacplasticspact.org.au

On 9th September 2020, the South Australian Parliament enacted the Single-use and Other Plastic Products (Waste Avoidance) Bill 2020 which aims to restrict and prohibit the manufacture, production, distribution, sale and supply of certain single-use and other plastic products in South Australia.

The Act, which is likely to come into force in early 2021, applies to a number of single-use plastic products, including: drinking straw, cutlery, beverage stirrer, as well as expanded polystyrene cup, bowl, plate, and clamshell container.

As outlined in part 3 of the document, the Bill extends to oxo-degradable plastic products which can no longer be produced, distributed, sold and supplied throughout the State.

Recently, the ABA published a fact sheet outlining our position about oxo-degradable plastics which is available here.

Oxo-degradable plastics are conventional non-biodegradable plastics (usually polyethylene (PE) or polypropylene (PP), that have additives incorporated at low rates (2-3%) to cause the product to fragment or disintegrate under some conditions, such as in sunlight or in the presence of oxygen or in an anaerobic environment.

None of these products meet the requirements of internationally recognised and consistent Performance Standards covering compostability and biodegradability, including Australian Standards AS4736 -2006 – Biodegradable plastics suitable for composting and other microbial treatment and AS5810 -2010 – Biodegradable Plastics Suitable for Home Composting.

The ABA welcomes the Single-use and Other Plastic Products (Waste Avoidance) Bill 2020 and hopes that similar legislations will be enacted by other States and Territories in Australia and extended to cover oxo-degradable plastics in other applications such as agricultural mulch films for example.

Copy of the Bill is available here.

GMI Research latest study, estimated the global bioplastics & biopolymers market at USD 3,587 billion in 2016 and projects it to reach USD 7,622 billion by the end of 2021, and is projected to witness a CAGR of 16.27% during the forecast period.

Major factors boosting the growth prospects of the bioplastics and biopolymers market include supportive government policies and regulations due to lesser toxicity and lower amounts of carbon content, growing concern for human health, and the high consumer preference towards bio-based bio-degradable packaging.

In 2016, the Bio-PET market is estimated to surge at the highest rate during the forecast period due to its increased usage in the packaging industry. These have similar properties to conventional PET. Bio-PET helps in the reduction of a product’s carbon footprint and also helps in recycling. The properties of Bio-PET include durability, flexibility, heat resistance, printability, and lower carbon content. This makes it the best fit for numerous applications in sectors such as packaging, automotive, consumer goods, textiles, and agriculture.

The packaging and bottles segment is projected to hold the largest share in the bioplastics and biopolymers market during the forecast period owing to its growing application in food, goods, cosmetics, and pharmaceuticals packaging. Bioplastics  are being used to manufacture various products such as bags, agriculture foils, toys, textiles, overwraps, lamination films, and disposable housewares, to name a few. The growing global preference for bio-packaged products by consumers is a crucial factor fuelling the growth of the packaging and bottles segment of the bioplastics and biopolymers market.

The Victorian Parliament’s Environment and Planning Committee is conducting an inquiry into the Environment Protection Amendment (Banning Plastic Bags, Packaging and Microbeads) Bill 2016.

The change to the Act would prohibit any bag that is made in whole or in part of polyethylene. The only exemption will be a plastic bag that is manufactured, supplied and used for medical or health-related purposes or for policing or security purposes or that is defined as an exempt plastic bag.

The Act will also prohibit plastic microbeads, defined by the Act asa manufactured plastic particle of less than 5 millimetres that is contained in or added to cosmetics, personal hygiene products (including toothpaste) and household detergents.

If passed, the amended Act will from 1 March 2017, require a retailer to display a notice in their premises, stating that the sale or supply of plastic bags by a retailer will be prohibited from 1 September 2017, unless the plastic bags are exempt plastic bags. Penalties will apply in circumstances where retailers have sold or supplied plastic bags in contravention of the Environment Protection Act 1970 from that date.

The Victorian Parliament’s Environment and Planning Committee sought community views on the detail of the Bill.

“While the inquiry is limited to the Bill rather than seeking to canvas in detail all elements of the issue of plastic bag usage, it is important that the Parliament has a detailed understanding of the implications of the Bill when it is considered early next year,” said Committee Chair, the Hon David Davis. “The Bill, if passed, will have a significant impact on the community and therefore the Committee considers it important that the community has input into the inquiry,” he said.

The Australasian Bioplastics Association (ABA) provided a submission to the Parliament of Victoria, Environment and Planning Committee Inquiry into the Environment Protection Amendment, stating that it supports such measures and initiatives, however pointed out that alternatives to the banned items should be considered as has already been done in jurisdictions in Australia and around the world, where such bans have already been implemented.

The ABA submission made some key points from the international experience of bans on plastic bags and packaging, to highlight some items for consideration by the Committee.

The ABA submission also highlights the role that certified compostable plastic bags can play as an alternative to the non-recyclable polyethylene plastic bag. With certified compostable plastics being fully biodegradable, there is no risk of micro plastic being available to the environment when disposed of in the required  end of life of composting, whether  commercial or home.

Submissions closed on the 21 October 2016, with The Victorian Parliament’s Environment and Planning Committee stating that it will present its final report no later than the 14 February 2017.

This very useful Bioplastics glossary has been provided by European Bioplastics Magazine.

Bioplastics (as defined by European Bioplastics e.V.) is a term used to define two different kinds of plastics:

a. Plastics based on renewable resources (the focus is the origin of the raw material used). These can be biodegradable or not.

– based on renewable resources and biodegradable

– based on renewable resources but not be biodegradable

– based on fossil resources and biodegradable